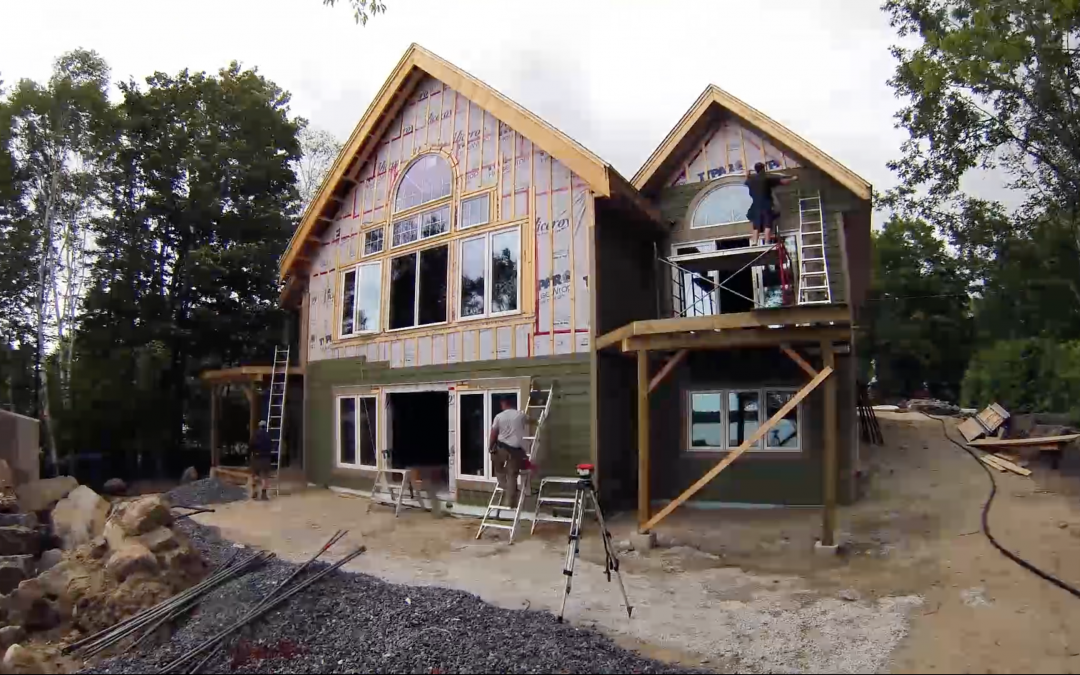 A couple months ago I started compiling footage for Cedarland Homes, the Viceroy dealer for Parry Sound and Sudbury, at one of their building sites. The goal is to capture the complete build from start to finish, a 90 day Time Lapse Video. So far, the camera has captured a host of activities; removing the old cottage, blasting out the bedrock, constructing the foundation and so forth.

After constructing what closely resembles a large birdhouse to encase the camera, we securely mounted the encased camera and left it to capture the magic. Some obstacles for this job included; powering the camera for 90 days (batteries would not work for obvious reasons – a power adapter and looong extension cord did the trick), and mounting the camera in such a way that the memory cards could be easily switched out every week without disrupting the exact composition of the shot.  For this we screwed down a mounting plate for the camera to clip into. In other words, the encasement had to be weather proof, easily accessible for changing the memory cards and fool-proof for returning the camera to the exact position.

Needless to say, I had some concerns going into this job. There were many potential hiccups in the process.  I was worried about  the camera gear over-heating, water getting in the encasement, the machinery and construction activity possibly ‘tripping’ or digging through the power supply.  However, after 60 days, and almost 500GB of photos later, we are in the process of converting the photos into a Time Lapse Video.  Thus, the result is looking great -you can be the judge of that!

FlyPress Films is very excited to share this Time Lapse Video sneak peek, and we look forward to posting the complete video in August or early September…stay tuned.

Notes:
-The stills are being converted to video footage in Adobe After Effects – This allows for the most options in post production.
-The camera is taking pictures 24 hours a day, 7 days a week. This minimizes ‘camera babysitting time’ but adds a lot of additional files to sort through.
-My original capture rate set on the camera was 1-frame every minute – this means every second of time lapse video was 24 min of real time. However in post I have further increased the speed to keep things moving along nicely.