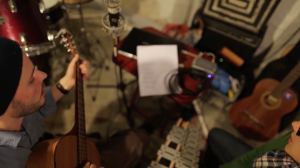 Coldplay…  They are one of my favourite bands too, but i would be pretty careful before slapping one of their songs in my next edit.  How many times have you run across that scenario while on YouTube?

With the millions of music licensing infractions that occur every day, the chances of being made the example may be slim, but it’s still not worth it.  Not only do you run the risk of your video being flagged and pulled off You Tube or Vimeo, but you could be facing a hefty fine or lawsuit.
At FlyPress, we take care of finding and licensing the right music for each project we edit, but for those clients who would like to be more involved in the process, you are welcome to have input in the selection.   A few great places to start when searching for the right track for your video are ‘Marmoset’‘, ‘The Music Bed’, and ‘Premium Beat’.   Between these few websites there is always something that fits the budget and style of what you need to ‘say’.  Most of our clients need to budget between $50-$600 for the music licensing of their project.   The price is often dependent upon size of the corporation (number of employees) and the intended use of the video.  And like so many things in life,  the good stuff costs more than the not-so-good stuff.
This is actually not as expensive as it may seem to someone completely foreign to the idea of paying to use a song or piece of music. If it makes you feel any better, a song that you may pay $300 to use for your business video may cost $10,000 to be used in an indie film and $25,000 – $75,000 to be used in the next James Bond.  Television commercials can fetch even more: a song can cost anywhere from $25,000 to $500,000 plus per year.  And remember, the audio component of the film really is half the battle.   Good song selection will do more for the mood and feeling of the work then anything else!  Think about the last time you watched a suspenseful movie scene. What if the Barney theme had been the supporting music? You would hardly have been on the edge of your seat… ‘I love you, you love me….’
If a client is looking for an original song or composition for their business video or promotional film, we can make that happen as well.  Before starting FlyPress Films I was a recording/performing artist under contract with Warner Bros. Music.  I have lots of experience in the studio creating and recording original tunes.  Not to mention, I have lots of friends currently in the music industry.  We can help you find your perfect music for video production.   Sometimes it is a nice touch to have the music created around the footage instead of the other way around.  It is always fun for us when this is requested.
For example, the music in this promotional video was recorded by a friend of mine, Dennis Michaelis, specifically for this video.
Cedarland Homes – Home Feature from FlyPressFilms on Vimeo.
I would encourage anyone that does this kind of videography to properly acquire the permissions necessary and not infringe upon other people’s work.  I know I wouldn’t want Coldplay taking my awesome cinematography and adding their shabby hit songs over top of it… Wait a second,  if they ever want to do that I hereby grant that permission – but not everybody is as nice as me.