Emily And Her New Friend Rosie 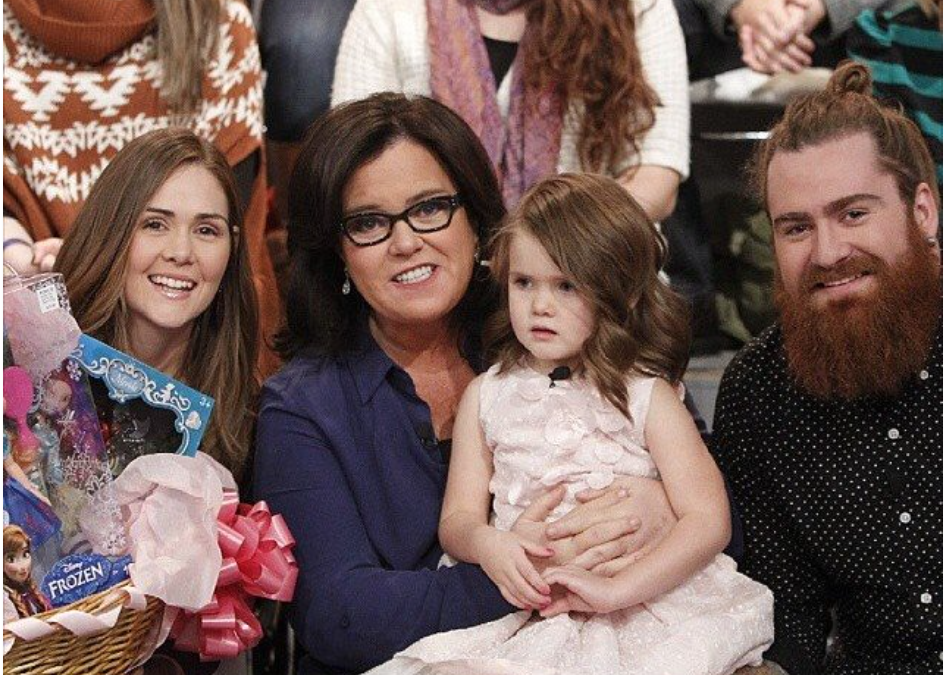 Emily’s adventures continue… Last week on ABC’s The View, Rosie O’Donnell played FlyPress Films’ “Emily’s Hair” video and gave a shout-out inviting Emily and Uncle Matthew to the show so she could hug them.

From Toronto To New York City 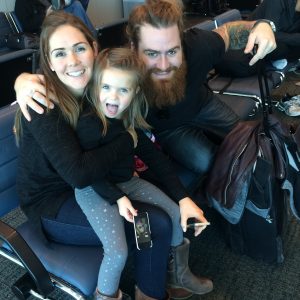 Excited to get on the plane

Two days later the producer had our plane tickets booked and arrangements were made for us to be on Monday’s show. Uncle Matthew, his fiancee Bree – who happens to be a make-up artist – (how convenient to be travelling with your very own hair and make-up team), Emily and I left Toronto on a jet plane and headed for the Big Apple.

Travelling on a plane with a 4-year-old is quite magical. Emily loved every little detail from pulling the suitcase by herself, to walking on the magic carpets, to the food and beverage service on the plane, and adventuring through the airports.

We arrived in New York City on Sunday evening, which happened to be the same day as the New York Marathon. We pulled into the hotel much later than planned since traffic was entirely grid-locked. We had just enough time to grab a quick bite to eat, then it was off to bed for Emily so she would be well rested for Monday’s show.

Monday morning we had a bit of time to ready ourselves for the big moment of meeting Rosie and being on The View. Emily started her day off by choosing a breakfast of champions -a pink cakepop (for those of you who know us…this was a real treat). Emily and I got our hair beautified by the talented Matthew Collins, our make-up done by Bree, then our driver picked us up and took us to the ABC Studio.

The View…time to meet Rosie

Prior to the show starting we had the incredible opportunity to spend some time with Rosie O’Donnell.  It was fun to see that Rosie was just as excited to meet Emily as we were to meet her. Rosie was amazing! She made Emily feel so comfortable with her charming personality, humour and genuine sincerity. She told Emily how kind it was that she shared her hair; that she is beautiful and so very special.

Emily was glowing as she listened intently to all the praises. I was so impressed with the way that Rosie engaged Emily and spoke love into her. (Thank you Rosie!)

Emily and I waited in the dressing room until it was time for our segment. I could sense Emily was feeling a little uneasy about the attention coming from every angle and meeting so many strangers (everyone we passed wanted to say something to her), so we danced and played silly games while we waited.

Dancing away the jitters

Finally it was time for our segment. The commercial break ended and the audience started to applaud, hoot and holler.

Silly faces while waiting for the show

It was very loud and the commotion startled Emily, but just then Rosie came down to sit with her and handled Emily’s unease like a seasoned pro (did you know that Rosie has 5 kids!!!) Emily could not believe the generous gift basket filled with Disney Princesses and tiarra’s presented to her – she was SO excited.

When the show ended, Emily had the opportunity to meet and talk with Kerry Washington, who was also very kind to her. The studio producers and staff were so hospitable and showed great kindness. What an incredible opportunity for Emily!

The Sights of New York City

After the show we had 3 hours to enjoy the sights of New York City before heading back to the airport. Our first stop?  FAO Schwartz – the biggest toy store in the world. (I think the grown-ups were more excited than Emily.)  It was SO cool – I’ve never seen so many princesses, dollies, puzzles and tinker toys.

Bree fulfilled a childhood dream by reliving the iconic scene from the movie BIG (Tom Hanks) as she danced with Emily on The Big Piano. Next we enjoyed some NYC street meat and laughed as Emily gave all of hers away to a hungry flock of pigeons. Then Uncle Matthew treated us to a horse-drawn carriage ride through Central Park.

The fusion between big city buildings and nature was so incredible. Lastly, we walked through the Park and got to enjoy the talent of dancers, magicians, musicians…not to mention the beautiful scenery.

By the time we arrived at the airport, Emily was exhausted.  But in true Emily-style she was just as pleasant, charming and hilarious as always. There was no sleeping on the plane either – not when you have cartoons to watch and a nice lady to bring you unlimited juice, pretzels and smarties. We were all happy to land back home in Toronto. As we pulled into the driveway, no one was more excited than Rich as he greeted us and scooped up our sleepy little ‘sweet potater’ (as Rosie called her) to tuck in bed with a kiss.

A snack for Roger

We are so grateful for opportunities like this that bring adventure and lasting memories.

Emily has unintentionally captured many hearts around the world and inspired many to share their own hair. (click to view the original Emily’s Hair video)

It all started with giving a 3-year-old an opportunity to share what she had a lot of with those who needed it.

For those of you that missed the segment on ABC’s The View, you can watch it here…